Skip to content
This is Kellan’s POV of Thoughtless coming out February 24, 2015! Kellan Kyle fans, did you see the stunning cover of Thoughtful?

The only place Kellan Kyle has ever felt at home is onstage. Gripping his guitar in a darkened bar, he can forget his painful past. These days his life revolves around three things: music, his bandmates, and hot hookups. Until one woman changes everything…

Kiera is the kind of girl Kellan has no business wanting-smart, sweet, and dating his best friend. Certain he could never be worthy of her love, he hides his growing attraction…until Kiera’s own tormented heart hints that his feelings might not be one-sided. Now, no matter the consequences, Kellan is sure of one thing-he won’t let Kiera go without a fight. 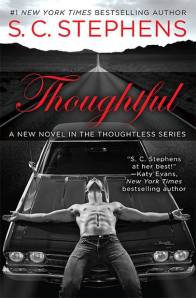 I’ll be doing an Author Takeover at M&D’s Have You Read Book Blog today at 2 p.m. EDT with a giveaway to win an ARC of For Luca (Chicago Syndicate, #2). Come join us in two hours.

We can vote for our favorite books, book boyfriend, BFF, hero/ heroine. One of my most memorable book boyfriends of this year has to be Tristan from Lovely Trigger by R.K. Lilley – come on, that guy redeemed himself COMPLETELY! Who’s yours?

Click here to join the Cover Reveal Party on September 27 with awesome Author Takeovers and many Giveaways.

The story of Fallon and Luca continues and ends in For Luca (Chicago Syndicate, #2).

Betrayal is difficult to overcome when the trust is gone.

Luca did everything for Fallon. But as the underboss of the Chicago Syndicate, he has an entire organization depending on him, and she is a weakness he can no longer afford.

When Fallon’s life continues to unravel, she will need Luca more than ever, but can she move beyond all the lies and deceit?
The pull of love still ties them together, but their secrets have driven them apart. Even after everything that’s happened, Fallon owns Luca’s heart, but the Chicago Syndicate owns his life.

How can he be with the woman he loves yet still remain loyal to an organization that lives by its own rules, above any law? It’s a choice he can’t afford to make, and when nothing is as it seems, the ultimate decision may mean life or death for Luca.

Go to Author Page to join the Party

We would love to see you there!

Rhythm is the heart of every song.

Jase Collins lives for the stage and the perks of rock stardom. His wild antics and high-profile affairs have earned the sexy drummer the title of Hot Wired’s bad boy. He’s not quite as jaded as his fans think — but just jaded enough not to recognize the best thing that’s ever happened to him until she walks out of his life. And he doesn’t even know her name.

But without harmony, a man is lost.

Fallon Morgan has had her life mapped out since high school. She’s earned a full ride scholarship to UCLA with the driving goal of earning her doctorate. Nothing can derail her dreams — except maybe a one-night stand with the infamous Jase Collins. His chilly reception the morning after convinces her to put her biggest mistake in the past and move on without looking back.

When two hearts begin to beat as one…

When Fallon’s life takes a dramatic turn, she finds herself with no one else to turn to for help. Jase is obnoxious, demanding, and yet surprisingly tender. Though it chafes her to depend on him, the more time she spends with him changes her perceptions of the bad boy rocker. With each passing day she finds more and more faith in the man behind the public persona. If she can learn to trust her feelings, she might be willing to risk her heart.

They could find themselves Lost in the Beat!

Thank you to everybody who voted.

All readers  – bloggers and regular reviewers – can sign up for the Cover Reveal, Release Day Blitz, and ARC of For Luca (Chicago Syndicate, #2).